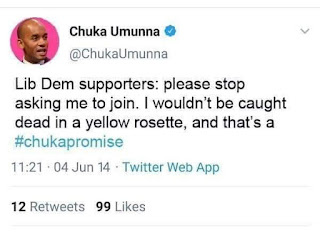 Change UK has been in news but not in a good way.  Former Labour/Change/Independent MP Chuka Umunna has finally joined the Liberal Democrats not that surprises anyone. This will help him keep his seat in Streatham where the local Labour Party has been infested by Momentum who drove him out of Labour. Frankly if I lived in Streatham I would vote for him as the Labour candidate will be one of the Corbyn cult.

It's rumoured that Heidi Allen former leader of Change UK is also considering a similar move and at least one of the other six "independent" MPs will go with her.

Change UK has been in crisis since it's failure to make any impact in the Euro elections which is why the six MPs split away. Frankly the main reason for Chaneg UK's failure so far is because no organisation was ever established on the ground. It has no members. Supporters can only donate. Hardly a healthy basis for a new party.

Even now though one of the MPs (I forget who) has been charged with setting up membership there is still nothing. In fact the only e-mail of late has been about yet another set back because of legal action over the name of the party:

We’re determined to do politics differently – which also means being transparent and straightforward with you as our supporters.

You may recall that lawyers for the company Change.Org disputed our right to register as ‘Change UK’ with the Electoral Commission ahead of the European elections.

Change.org said they would sue each of our MPs individually unless we signed a legal agreement that would prevent the permanent use of the name Change UK. With no time left to register a new party name ahead of those European elections, our leadership at the time felt we had no option but to agree.

Change.org say we must register a different name by 15th June or we as individuals risk being taken to court by them. We have asked them for more time to find a solution, but sadly they insist we must alter our name without delay or face legal action.

This situation reflects the difficulties that new and smaller political parties can encounter. Of course, this does not in any way alter our determination to build and grow as a political party and movement. Our values and the reasons we founded our party remain the same.

That is why with the Conservatives leaning further towards their right-wing and Labour lurching to the left, we will continue to focus on the biggest challenges for our country, changing Britain’s broken politics and avoiding a disastrous no deal Brexit.

I have to say the name doesn't help the party's cause at all. It's messy.The window of opportunity for a new centre party around Change UK is steadily fading.

A number of Liberal Democrats have been trolling Change UK's unofficial Facebook groups. There are three of these and it's caused much ill-feeling towards the Liberal which includes myself even though I am prepared to have some kind of electoral arrangement with them come a General Election.

There does remain a need for a new centre party but time is running out for this project though it shouldn't be written off quite yet.

**Before anyone writes in saying the tweet is fake. I know but it amused me to take the piss out of Chuka so it stays.
Posted by Howard Fuller at 03:57